Transcription is the synthesis of a messenger RNA (mRNA) molecule from the DNA sequence of a given gene. Occurs in the nucleus of the cell. Translation is the creation of a protein from this newly formed mRNA molecule. The term “translation” was chosen to emphasize the difference in nature between RNA (composed of nucleotides) and proteins (amino acids). “Translation” consists in deciphering the genetic instructions and materializing them as proteins. This important step takes place in the cytoplasm of the cell – its inner part – thanks to the presence of structures called “ribosomes” and transfer RNA (tRNA). Explanations.

In the diagram above, the green circle represents the nucleus of the cell, which houses the DNA molecule. It is made up of building blocks called nucleotides. Ultimately, a gene is a set of nucleotides encoding a given protein. During transcription, a so-called transcription factor is sent to the DNA molecule to look for the copied gene. This copy will be in the form of a strand of RNA, called “messenger RNA” in this case, and which will leave the nucleus through the nuclear pores, the “gateway” between the nucleus and the cytoplasm. This process is not applicable to bacteria and archaea, which do not have a nucleus and whose transcription occurs directly in the cytoplasm.

The genetic code: the key to translation

In the late 1950s, after the discovery of the DNA double helix, biologists were worried about the question: how does a cell manage to translate the information carried by nucleotides into a chain of amino acids? Indeed, the building blocks of RNA are nucleotides, consisting of four different nitrogenous bases: adenine (A), guanine (G), cytosine (C) and uracil (U), and proteins are amino acids (20 pieces). .

Several hypotheses have been put forward. But the one that turned out to be experimentally accurate belongs to two biochemists: the American Marshall Nirenberg and the German Heinrich Mattei. In 1961, they succeeded in synthesizing a chain of amino acids consisting solely of one of them, phenylalanine, from mRNA, the base of which is only uracil. They concluded that the base triplet (codon) UUU codes for the amino acid phenylalanine. Building on this initial success, Nirenberg and another colleague, the American geneticist Philip Leder, devised a method to identify the corresponding codon for each of the 20 amino acids. The table in which this work is recorded is called “The Genetic Code”, and it won Nirenberg the Nobel Prize in 1968.

This genetic code surprised scientists. For example, the amino acid arginine has six codons, while one is enough. However, this redundancy makes protein synthesis reliable, since many mutations (such as transcription errors) become synonymous codons. Another feature of this genetic code; it is almost universal, that is, it is valid for all living beings.

In the cell, the cellular machinery that translates this genetic code is the ribosome, a small spherical structure. After transcription, as soon as the mRNA molecule is in the cytoplasm, it attaches to the ribosome. At the same time, small molecules called transfer RNA (tRNA) take charge of the free amino acids present in the cytoplasm and direct them to the ribosome. Each tRNA consists of an anticodon (complementary to a codon) and a binding site for that amino acid. Specifically, the role of the ribosome is to link an mRNA codon to the corresponding tRNA anticodon. After attaching to each other, the tRNA releases the amino acid. The ribosome then opens the next codon. A new tRNA is created. The anticodon and codon are bound together and the new amino acid is detached. The amino acids will then bind together, gradually forming a protein. 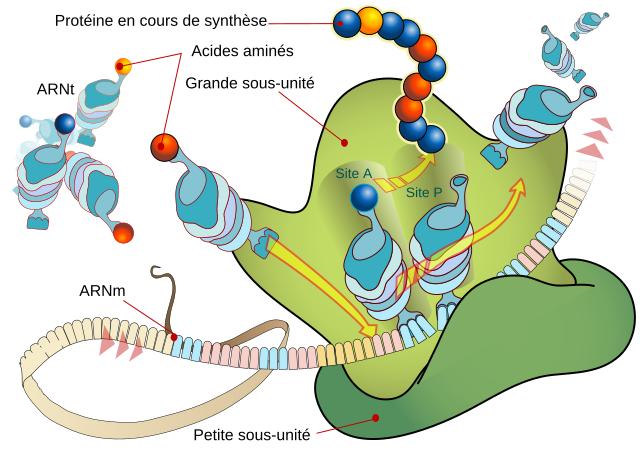 Thus, the ribosome is a key element in protein synthesis. Researchers now know its exact structure and have been trying to mimic its function in order to produce other molecular chains. In 2009, the Nobel Prize in Chemistry was awarded to Venkatraman Ramakrishnan (England), Thomas A. Steitz (USA) and Ada E. Yonath (Israel) for their work on this molecular machine.

Other cellular compartments are involved in protein synthesis.

Some proteins destined for secretion by the cell complete their synthesis in a cellular compartment called the rough endoplasmic reticulum (RER). The ribosome is then placed on the surface of the RER, and after the binding of the first amino acids, the rest of the process takes place in the reticulum. Within this structure, proteins are modified, for example by the addition of sugar, and then folded to be functional before quality control is carried out by the enzyme.

Protein synthesis is critical for living beings. To give a concrete illustration of this, some classes of antibiotics defeat bacterial infections by preventing the formation of ribosomes in bacteria. If no more proteins are synthesized, there is no more life.