Drones and rain rarely go together, a harsh reality that some users have come across quite brutally. But there are exceptions when it comes to very high-end models, like this new Matrice 30 Enterprise, a true propeller-powered Rolls-Royce designed for the pro and able to take on bad weather without flinching.

At least that’s what DJI says. The manufacturer has taken the concept of its M300 RTK capable of withstanding a downpour and taken the waterproofing to a level never before achieved on this type of drone. The Matrice 30 Enterprise performs even better, according to DJI; it can fly in heavy rain for a long time.

But to talk about this new DJI Matrice 30 Enterprise as a simple waterproof drone would be very simplistic. It can also operate at a time when any other drone would not even consider sticking out the tip of the propeller. Thus, the official statement claims that the device is able to fly in heavy rain, with winds up to 15 m / s … and even at an altitude of up to 7000 m!

DJI claims that the machine is even capable of withstanding impressive temperature changes; it is designed for flights from -20°C to 50°C! According to the manufacturer, this even means that it can develop into a snowstorm. In this way, the DJI Matrice 30 Enterprise can ignore many elements that are usually problematic for consumer and even professional drones.

In terms of optics, this machine is entitled to a 12-megapixel wide-angle camera and a 48-megapixel camera with x16 zoom, which will allow you to shoot video in up to 4K resolution at 30 frames per second. Photos can reach 8K resolution. It is also equipped with a laser rangefinder, a night vision system and can be equipped with an infrared camera.

Reading through this particularly impressive technical sheet, we could expect a bulky and rather massive device, as is often the case in this category. But for a professional drone, the DJI Matrice 30 Enterprise is relatively light: only 3.7kg; it even has retractable levers found everywhere on consumer models.

So overall the design is relatively close to the excellent Mavic series devices. Quite surprising, knowing that they are not fighting in the same category at all, but very noticeable; this greatly simplifies transport, deployment and maintenance compared to other machines in this segment.

Obviously, this also means that there is less battery space than on many professional drones. Thus, this model loses autonomy compared to its predecessor M300 RTK; instead of the 55 minutes of flight claimed by his senior, the Matrice 30 Enterprise has to settle for 41 minutes. This is still significantly more than most of the main segment, but still not enough to compete with the best in this category.

Finally, there is icing on the cake, and last but not least. This superb device even has its own docking station that even turns into a real hangar called the DJI Dock. Once inside, the structure closes and the drone is protected from rare conditions it cannot withstand; therefore, it can be charged in just half an hour, calmly waiting for the next flight.

But this is far from the only interest of this station, which is essentially a real small base of operations. It also acts as a relay that allows communication with the drone at a theoretical maximum range of 15 km. It even has its own weather station!

A whole ecosystem of advanced features

As with the recent Parrot ANAFI Ai, engineers can program their own automated routines themselves; So a drone can take off from its station, go on a task like bypassing an industrial plant, post the result of its collection online via the cloud, and then return to the dock before repeating 30 minutes later. .

The remote control is also a great gadget on its own. Clearly waterproof and shockproof, and capable of operating at temperatures from -20°C to 50°C and shockproof, its shell hides a sacred technological arsenal. Its four antennas are powered by two used, replaceable batteries for trouble-free piloting. They are compatible with 65W fast charging. 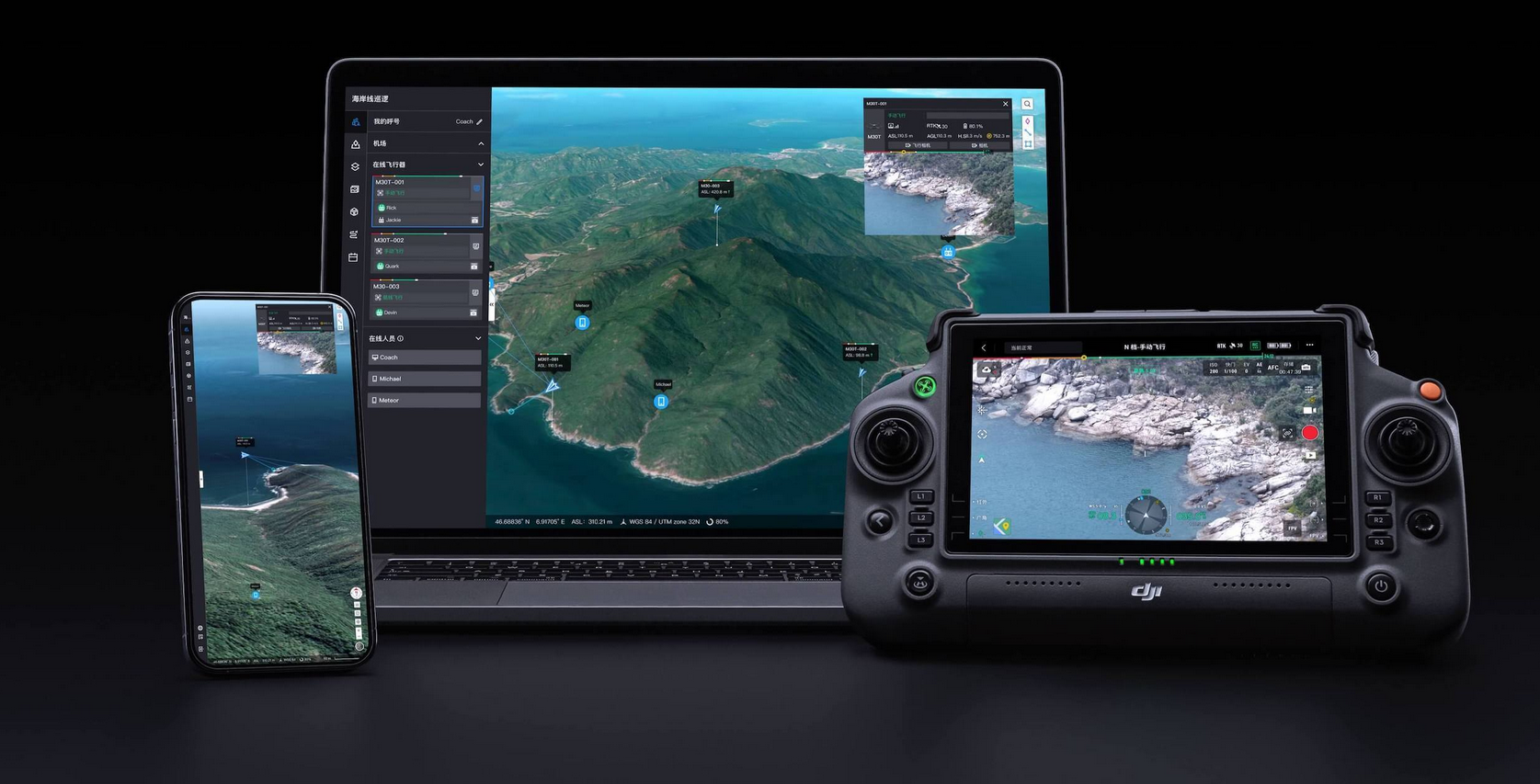 DJI also introduced DJI FlightHub 2, a “comprehensive cloud-based operating platform” that allows professionals to coordinate multiple devices or accurately track the actions of a specific drone. This system also allows you to determine the sectors of work, navigation routes and quickly synchronize all the data collected by the drone.

All in all, we are dealing with a real gem of a drone that will surely delight professionals. But you have to put your hand in your pocket. The base M30 package starts at $9,999 (~€9,067) without options. The second model, this time equipped with a thermal imaging camera, starts at $13,999, or roughly €12,737.