In the board game scene of the 1990s, HeroQuest held a special place in the hearts of some teenagers. A true introduction to Dungeons & Dragons-style RPGs with simplified rules, but in a setting that has been noted by more than one budding adventurer, this game emerges from oblivion and still shows all its qualities.

I must say that HeroQuest knew how to create their own legend. Published by MB in 1989, it was one of the games often found on the shelf next to Power 4, Touché Coulé, Monopoly, La Bonne Paye or Hippos Gluttons. Created for a more mature audience, the fact remains that board game enthusiasts ardently revered this title. A game that instantly takes us to a heroic fantasy world where a barbarian, elf, dwarf and sorcerer must join forces to defeat a common enemy led by a dungeon master named Zargon, incarnated by one of the players. .

In early 2022, Hasbro and Avalon Hill are finally offering a new edition topped off by an incredible and lucrative Kickstarter campaign that raised $3.7 million in 2020. It is in this context that the two publishers decided to offer a luxurious setting for HeroQuest. a 2022 version that aims to reproduce the original as faithfully as possible with the addition of higher quality elements.

However, the box has a price: 120 euros. But this one wants to be premium, while resale sites like LeBonCoin or Vinted still see ads offering to buy a vintage game (sometimes incomplete) for more than 200-300 euros. This new edition weighs its weight, about 3 kilos on the scale, and its content is impressive. Judge for yourself: 31 monster figures and 4 hero figures are completed with 15 pieces of furniture (tables, miniature bookcases…), 10 skulls, 4 rats, 21 dungeon doors, 93 game cards, 4 reference cards, cardboard tiles, a book of 14 quests, 4 character cards, game master screen, character sheet block, 6 white combat dice, 2 red dice, and a rulebook. Ugh! Not to mention a huge playing field made of thick cardboard, which is supposed to be placed on the ground, carpet or a large table. 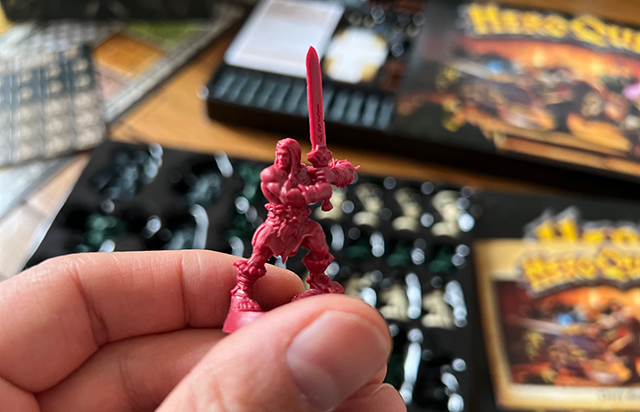 We can also appreciate the detail and sophistication of each figurine, which some do not hesitate to paint with precision to personalize them, as some players did thirty years ago. However, we can curse the plastic mold system that frames each figurine. While this is intended to protect them, some parts are difficult to remove from the case. Then we may prefer to place them on the foam plate for the next games.

Once in place, the game brings back the memories of old players, but there is something to surprise newcomers too. Although the game is recommended for children aged 14 and over, younger children who can read and are used to the fantasy world can also find their way here, as the rules are very easy to learn during the first game. Count also about an hour or two depending on the length of the quests on offer. We then look back at the commercial (below) that made us dream like this in the early 1990s during youth broadcasts.

Specifically, HeroQuest invites two to five players to the table. One of them plays the role of Zargon, the narrator of the epic and the master of the game, placed behind his screen of rules, the others embody one of the four heroes of their choice. It is also possible to incarnate several adventurers at the same time if one or two players have gathered in front of Zargon. Because HeroQuest is a cooperative game, and there is no competitive spirit or individualism that will allow you to defeat the creatures that stand in your way. We also appreciate the opportunity to see the setting, its monsters and traps, and its treasures unfold on set as the epic unfolds. 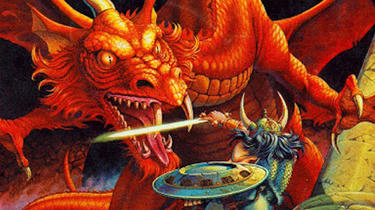 Messy in its mechanics, HeroQuest was able to offer a sweet and nerve-wracking re-reading of the mythical Dungeons & Dragons for its time. Back then, it was perceived as a real gateway to the rich universe of role-playing games. A bet that was a big hit around the world, sparking a wave of nostalgia among the thirties and forties who were able to try it. Above all, HeroQuest was able to offer an affordable way to let your imagination run wild, allowing everyone to create their own quests and renew their interest with every game. That is the whole point of this play, which deserves to be returned to the living room table, lit by candlelight, during a long night when thunder rumbles.