The situation is alarming: Greenhouse gas (GHG) emissions continue to rise, while the report of the first working group of the Intergovernmental Panel on Climate Change (IPCC) detailed the detrimental effects on the functioning of the Earth’s climate, and the report of the second working group of the Group described the impact and destruction for all human activities. This third ‘mitigation’ panel quantifies the accumulation of greenhouse gases in the atmosphere and details all the methods that should be applied as well as public policies that should be adopted to limit temperature rise to 1.5°C from 30°C.

Human greenhouse gas emissions reached 59 billion tons of CO2 in 2019, i.e. 12% more than in 2010 and 54% more than in 1990. The average value over the last decade was 56 billion tons per year. This is a record for these ten-year averages. In absolute terms, emissions in the energy sector and industry increased the most, outpacing methane emissions. In 2019, 34% of emissions came from energy, 24% from industry, 22% from agriculture, 15% from transport and 6% from residential construction. But if we take into account that 90% of energy production is intended for industry and buildings (residential and tertiary sector), then the share of industry rises to 34%, and housing to 16%.

However, we can capture two good news. On the one hand, growth rates are slowing down. Between 2000 and 2009 it was 2.1%, and between 2010 and 2019 it was 1.3%.2 fossil fuel emissions per unit of primary energy) decreased by 0.3% per year. A sign that less polluting technologies are gradually gaining momentum.

However, there is more and more urgency. Between 1850 and 2019, 2400 billion tons of CO2 was released into the atmosphere, 17% of which only in the last decade. To keep the temperature below 1.5°C, only 500 billion tons would have to be emitted, i.e. eight years of emissions at current levels. At 2°C the budget is 1150 billion tons. And the richest should act first. In fact, the richest 10% of households are responsible for 54% of emissions compared to less than 15% of the poorest half of humanity. The National Contributions of States published under the Paris Agreement at COP26 in Glasgow in November 2021 resulted in a 3.2°C rise in global temperatures. Climate catastrophe…

According to reports compiled by the IPCC on the energy sector, solar and wind energy are the most powerful tools for reducing greenhouse gas emissions, far ahead of biomass, hydroelectricity, geothermal energy and nuclear energy. The good news is they are all over the world. Between 2010 and 2019, the use of solar kilowatts increased tenfold, and their price fell by 85%. The cost of wind energy has decreased by 55%. The price of electric batteries has also fallen by 85%, and the number of electric vehicles has increased hundreds of times. The fight against methane leaks, both around old wells and throughout the gas distribution system, also has good potential to reduce the energy sector. 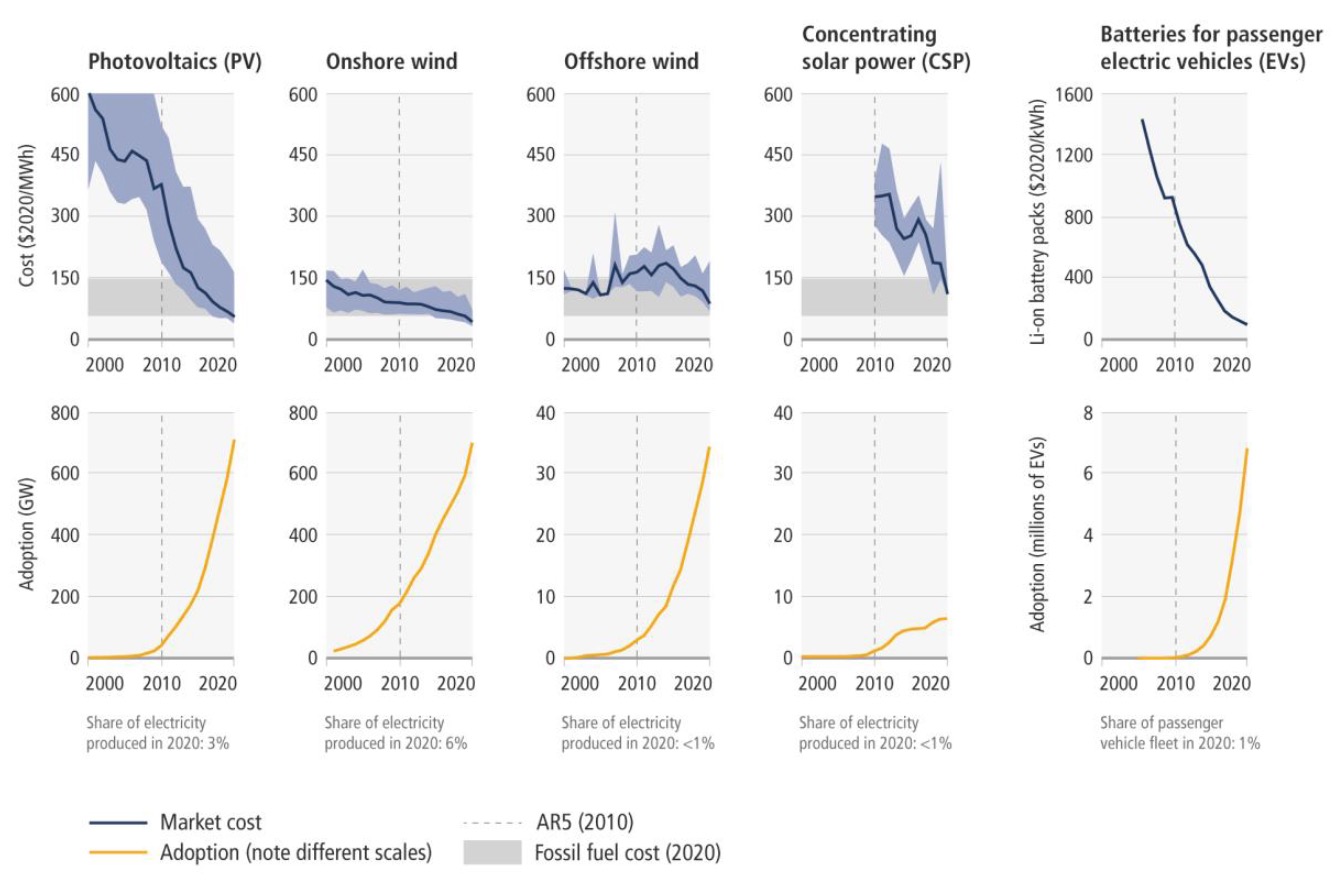 From an agricultural, forestry and land-use change perspective, carbon sequestration in agricultural soils, in particular by increasing their organic matter content and reducing or even halting deforestation, remains the most effective leverage. Fighting food waste and switching to a more sustainable, meat-less diet are of lesser importance.

Aside from these two high-performing sectors, other areas of housing, transport and industry offer less room for significant cutbacks. Unsurprisingly, the construction industry welcomes the policy of insulation and energy renewal, as well as the design of new buildings, energy efficiency and savings in heat and electricity. According to the report, 61% of emissions from this sector could be avoided in 2050 with the only technologies available today. In transport, energy efficiency is again recommended, as well as reducing the use of the car in favor of walking and cycling, reducing the need for mobility, switching to an electric car. In industry, the use of hydrogen, bioenergy and renewables to replace coal, gas and oil is the most efficient way forward, ahead of recycling, the circular economy and reducing the use of raw materials. “Innovation has already provided opportunities to reduce emissions and contain the growth of these emissions, creating environmental and social co-benefits,” says in the report.

Carbon tax, emissions allowances, climate finance: there is no shortage of regulatory tools to hasten the end of fossil fuels. Their use by public authorities is expanding at a rate that, however, is not fast enough, the IPCC notes. In 2020, more than 20% of GHG emissions were taxed or subject to emission quotas, which is still not enough, especially since the price per tonne of carbon is too low and not stimulating enough. In 2020, 56 countries, accounting for 53% of global emissions, had energy efficiency policies, targets to reduce deforestation, and incentives for the adoption of new technologies. This policy avoided billions of tons of CO2 and 1.8 billion avoided by economic regulation tools, while a growing number of laws have resulted in savings of 5.9 billion tons per year since 2016. In terms of climate finance, it increased by 60% between 2013 and 2020. But, unfortunately, rich countries have still not been able to mobilize the $100 billion a year in aid for the poorest countries that was promised over a decade ago.

This is now the goal of the international community: “net zero emissions” by 2050. This term means that activities that cannot be decarbonized will be offset by terrestrial carbon sinks (forests and plants) and the ocean. To do this, global emissions, which still continue to grow at a rate of 1.3% per year, must be reduced by 27% in 2030 and by 63% in 2050. target -65% at the end of the decade. To achieve what today seems unattainable, the IPCC warns that it will be necessary to go through a global transformation equivalent to the “transformational change” advocated by the other major UN biodiversity convention.

Therefore, the IPCC encourages the accelerated development of non-CO2 technologies.2 Keywords: renewable energy sources, electricity storage, energy saving, biomass use, hydrogen, biogas. CO capture and storage technologies2 and direct capture of GHGs from the air should remain, according to the researchers, only the definitive solution for recovering emissions from recent fossil fuel uses, especially since processes that do not emit CO2 are mostly at the stage of pre-industrial pilot production.

This profound transformation will hurt not so much in terms of jobs (the transition should, on the contrary, create them), but in terms of investment. The amounts allocated today to finance fossil fuel infrastructure should never turn a profit. On the contrary, the fact of leaving large amounts of oil, gas and coal in the bowels will lead to losses estimated at more than 4 trillion (one thousand billion) dollars. The authors suggest that the pipelines that are used today to transport oil and natural gas to consumer countries serve to transport CO.2 are captured by flue gas cleaning systems of factories. Which really looks like another world.